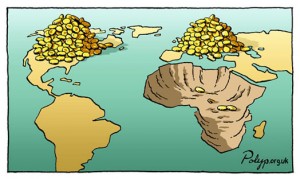 One of Work Way readers is asking: “According to a popular opinion, capitalism always makes the society thrive. Though Buzgalin, an economist, says that only 20% of all capitalist countries live in prosperity, while the rest are miserable”.

Indeed, the bourgeois propaganda is trying to convince the labor, overtly and covertly, that capitalism makes the society thrive. Only the majority of former Soviet republics, even if they ever shared this opinion, having previously believed the bourgeoisie, didn’t do it for long. They shared it right until the point they experienced capitalism firsthand and had the chance to compare the newly arrived bourgeois paradise with the lost socialist past. Among Russian citizens there aren’t a lot of people who think that “capitalism makes the society thrive”. The more time passes, the less people believe in that. It could not be any other way. Direct experience is the best teacher. END_OF_DOCUMENT_TOKEN_TO_BE_REPLACED