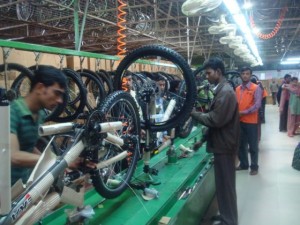 Capitalist economists claim that a worker’s wage is the price of his or her labor. This way they want to prove that workers receive full remuneration for their labor and that no exploitation happens.

For the first time in history, Marx exposed the true essence of wages, showing the actual relations that are hidden behind this form of wages. Marx proceeded from the fact that we must strictly distinguish between such notions as “labor power” and “labor”. Labor is not a commodity and cannot be sold by workers to capitalists. After all, any commodity has value which is created by labor. If labor is a commodity, it must have value. The question is, what creates the value of a commodity like labor? You may answer: as with any commodity – labor. So labor is created by labor? But this makes no sense.

This means that labour cannot be a commodity, if only for the reason that it has no value (and what has no value cannot be sold or bought). Labor itself is the creator of value. Thus, the worker is not selling their labor, but their ability to work, i.e., labor power. Therefore wages are a form of value and price for labor power. But on the surface, it appears to be payment for labor, that is, the value and price of labor.

When does a worker receive their wages? After he or she has produced a certain product, a certain number of products. One gets the impression that the amount of money he or she receives is indeed the payment for their labor, because the amount of wages depends directly and solely on the output. The same thing happens if the worker is not paid for a quantity of products, but for working for a certain amount of time. The worker is not paid when they are hired, but after they have already expended their labor for the factory owner during a week or other period. To an onlooker, it seems as if the worker has given their labor and received their price for it for a week or a month.

By appearing to be the payment for labor, wages conceal the real state of affairs (and this often confuses workers, which capitalists gladly take advantage of). A worker works, for example, 8 hours a day and receives $8 in wages, at $1 per hour. A misleading notion is created that their labor is paid for entirely – after all, the worker is paid for all 8 hours they have worked. In reality, only necessary labor is rewarded in the form of wages. This is why Marx defined wages as a transformed form of the value and price of labor. Why transformed? Because wages are made to appear not what they actually are in this case.

Wages express the production relations between the bourgeoisie and the proletariat, the relations of exploitation of the class of hired workers by the capitalists. Surplus value gets appropriated fully by the capitalists and they share a tiny amount of it with the hired workers in the form of wages. The wages do no represent the value created by the workers in the process of production, but only the value of their labor power.

This is the essence of wages as a transformed form of value and price of labor power.

In slightly easier terms: we are constantly told by capitalist MSM that the harder we work, the better living conditions we have. But in reality, no matter how hard you work as a hired worker, you’re going to get paid not for your labour that creates profit (which would imply that the more profit/value you create, the more you get paid), but for your labor power, for your ability to work. And the price of labor power in your speciality depends entirely on the will of capitalists. Since capitalist profit comes from the unpaid part of the value created, for the majority of hired workers (except the so-called “labor aristocracy”) this means that the price of their labor power is going to be kept at a minimum, covering only their most basic needs (fulfilling which is necessary for the daily restoration of labor power) and oftentimes not even enough to cover that. As a result, the more you work, the less you get paid, because by working more you create more and more profit for the capitalists, while your wages remain the same. Bonus payments, just as the wages themselves, are a tiny part of the surplus value that you and other hired workers have yourselves created. You create all the profit, the profit gets appropriated fully by the capitalist and then you receive a tiny amount of it (just enough to sustain your biological needs) in wages and bonuses.