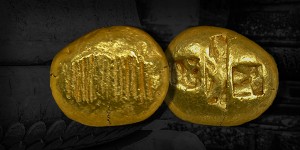 (The followng material has been prepared as part of the series “Political economy of capitalism. Basic course”)

9. What is money and how did it originate.

Before answering this question, let us remember Robinson Crusoe. All the things he saved after the shipwreck came in handy to him, all except… money. And how much effort he used to make to get it. And suddenly, when he found himself alone, the money had lost all value. “Unnecessary junk! – said Robinson of the coin. You’re not even worth bending over to pick you up off the floor.”

Yes, indeed, where there is no exchange, there is no need for money. There have been times in the history of human society when people lived without the knowledge of money and had no need for it.

The so-called nominalistic (state) theory of money is widespread. It asserts that money is the result of the will of the state, that any form of money, even a gold coin, has power only insofar as it is marked by a state mark that determines the denomination.

This is an erroneous understanding of the issue. Let us refer at least to a well-known fact in history. There was an emperor in Rome, Gaius Caligula (37-41 years.). It seemed that there was nothing he was not allowed to do and everything was under his control. He brought his horse to meetings of the Senate. He demanded that his subjects kiss his feet. No one dared to contradict him. At that time, special shells called “kauri” circulated as money in India, Ceylon, and parts of Africa. They were quite rare and labor-intensive to obtain, which is why they were valued dearly. And so, when the Roman treasury was completely emptied, the all-powerful Caligula issued an order to collect the shells on the seashore and view them as money. This undertaking by the all-powerful emperor had to end in complete failure: no one would take these shells because they were not money.

Karl Marx, for the first time in the history of economic thought, gave the only correct scientific explanation of the essence of money and the reasons for its origin. Money is the fruit of a long historical development. Its appearance is inextricably linked to the exchange of goods. In the development of commodity production, in the replacement of some forms of value of goods by others – that’s where the mystery of the origin of money is hidden.

Initially, goods were exchanged without the help of money. And the exchange was an occasional, episodic phenomenon. Products were not produced for exchange. But some primitive communities had a surplus, most likely as a result of favorable natural conditions. Surpluses were exchanged, and exchanged, of course, accidentally. Why accidentally? Firstly, the exchange could take place at random meetings of communities or tribes. Secondly, the exchange itself was very primitive: products could be exchanged or not, but it had no economic significance for their owners.

This kind of exchange relationship was of a casual nature and is called a simple, separate or casual form of value. In this case, one object is exchanged for another. For example, among the New Guineans a hair bracelet is exchanged for a stone axe, a number of Negro tribes give a hoe in exchange for a goat, etc.

The casual character of the exchange already testifies to the transformation of the product of labor into a commodity. Products gradually began to be exchanged as equivalent things. In exchange, these products play different roles. A hair bracelet expresses its value in a stone axe. Since it expresses its value through its relation to another commodity, this means that it is in a relative form of value. The stone axe serves as a material for expressing the value of another commodity, as if it were valuing it, serving as an equivalent of its value. Hence, the stone axe is in an equivalent form of value.

Can any of these forms of value exist without each other? No, there is an intimate connection between them. A hair bracelet cannot be in a relative form of value unless it is exchanged for a stone axe or something else, and a stone axe cannot be an equivalent if it is not opposed to a hair bracelet or another commodity. At the same time, the two commodities are opposed to each other. This should be understood as follows: a commodity can express its value through another commodity if the latter has a different use value. In other words, a hair bracelet cannot express its value through a hair bracelet.

With the emergence of the first major social division of labor, with the separation of pastoral and agricultural tribes, the exchange of goods becomes more or less regular. This stage in the development of commodity production corresponds to the full, or expanded, form of value. There are now many commodities involved in the exchange process, and the same commodity is exchanged for many other commodities. For example, among the Sudanese Negroes there were the following exchange relations of commodities:

In the casual form of exchange, each commodity was opposed by only one commodity. And in the deployed form one commodity in the relative form of value (in our example 10 baskets of salt) receives an expression of its value in a number of commodities – equivalents.

As production progressed, the number of products to be exchanged increased. But among the multitude of goods there gradually stood out those that were exchanged more often than others and became the measure of the value of all other goods. At different times these goods were shells for some tribes, furs for others, cattle for others, etc. With the transformation of one commodity into the universal equivalent, the full, unfolded form of value gave way to another, more developed form of value, which is called the universal form of value. Now a multitude of commodities expresses their value in one commodity, the universal equivalent.

This is only an approximate scheme. It took a long experience of exchange before any commodity could stand out and become the main object of purchase and sale. This universal equivalent could become a commodity, which most clearly expresses the value of other goods and is exchanged more often than others. And so when the universal equivalent becomes only one commodity, and only it, and not any other, then the universal form of value is replaced by the last, highest stage of development of the form of value – the monetary form. It has the following form:

Thus, as a result of the long development of commodity production and exchange, money arose.

What is money? Money is a commodity that stood out as a universal equivalent as commodity production and exchange developed. Like all goods, money has value and use value. In this sense, it is no different from ordinary goods.

But the most important characteristic of money is that it is a special commodity. Money becomes such by virtue of the fact that it is exchanged for all goods, serves as a means to meet all needs, acquires universal consumer value.

Money, like the value of commodities, expresses the social relations between people in the process of production and exchange.