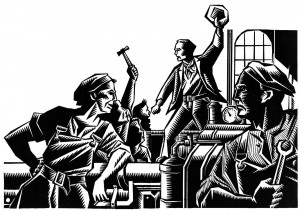 Question: You call your website workers’ as well as your movement. This causes a question: what about representatives of intelligentsia and other categories of professionals who are not considered workers, though they are far more in number than workers (like teachers, doctors, drivers, engineers, technicians, experts and so on)? Have they nothing to do with your movement?

Answer: The word “worker” in the name of our movement shows that our movement represents the outlook and class interests of the working class, including its core interests.

Working class (proletariat) is one of the two key social classes of capitalist society.

As for intelligentsia, it is not a class, but an intermediate stratum of society, with the division criterion being not the place in public production and not the relation to production means, as is the case with social classes, but the mode of labour, whether it is mental or physical. Hence, it is clear that intelligentsia may include representatives of all the existing social classes with their respective adjacent strata of society, once they are occupied with mental labour.

Moreover, class affiliation is not determined by the profession of a person (at least, it does not always strictly correspond to it). For example, a docker or a caster is always a worker, a proletarian. But, say, a driver can belong either to the petty bourgeoisie, or the working class (proletariat), or be a semi-proletarian.

A technician is usually a worker, too. An expert can also be attributed to the working class, if his function does not include supervision of workers instead of the owner of the enterprise, the capitalist. In the latter case it means he belongs to the employees and adjoins the bourgeois class opposing the proletarian class, since this class of exploiters has completely opposite economic interests to those of workers.

As for teachers and doctors, their class affiliation depends on exactly where they work and what their functions are. If it is a state enterprise whose purpose is not to earn a profit, then they are employees. Fellow employees are  adjacent to the proletarian class in their position. Higher-level employees stand on the side of the ruling bourgeois class.

But teachers and doctors can also work in private educational institutions or in paid clinics organized as capitalist enterprises. Then their class position approaches the position of the proletarians, since their labor brings surplus value to the owners of these enterprises.

It is similar with other professions. That is, each case should be considered specifically, it is the only way to determine if this or that person is a worker or not.

Here it is necessary to understand another thing, that a proletarian is not an uneducated and unskilled employee only engaged in primitive physical labor. This view of a proletarian (a worker) is only convenient for bourgeoisie, the class that is now dominating in our society. In fact, the proletariat is now fairly well educated, and often their education is not worse (or even better!) than that of employees engaged in mental work. But due to the dominant bourgeois ideology in our society, which consciously divides the working population into parts to oppose one another, intellectuals often consider themselves to be higher than  workers by social status and education (culturedness), although they have no serious reasons for this (including economic ones!).

Modern production with its highly developed technology and very sophisticated machinery requires very skilled workers who are familiar with technological processes at the level of engineers, at least. Manual labor, requiring no special knowledge or skills, has largely become a matter of the past. Mechanisms, machines and industrial robots have long since replaced it. Capitalism is, above all, large-scale machine production. That was what made this social system progressive in the history of mankind. Manual labor of hired workers, of course, is still used in the modern world of capitalism, and, unfortunately, even in our country, that has lagged behind in its social development to decades ago, but these are either remnants of obsolete, long-since-abandoned production relations, or elements of capitalist degradation, decomposition of the capitalist mode of production.

It is worth mentioning here the specifics of our country, Russia, whose capitalism arose as a result of the counter-revolution destroying a more advanced socialist socio-economic system. This manifests, particularly, in the fact that a significant part of our working class comes from the former Soviet working class, which in the USSR received a very good education (by today’s standards, it is the highest, in fact, the level of modern technical universities). These workers have such a high knowledge of production technologies that is unattainable for today’s “specialists” (bourgeois engineers and modern style management), who are now mostly in charge of production. The fact that the former Soviet supercomplex enterprises are still working somehow is entirely due to the workers and the few former Soviet production engineers, and not capitalist managers who are paid for by private owners by far higher than the workers. (See more details here.)

And another feature of Russia, also a direct consequence of recent socialism, which is also uncharacteristic for capitalist countries that did not have the historical experience of socialist society, is the high desire of Russian youth for higher education. Together with the utmost unemployment, this leads to the fact that factories often employ as workers people with higher education (or even two higher educations!).

All this clearly shows that there is not the slightest reason for the self-conceit and exaggerated ambitions often to be seen among representatives of today’s Russian intelligentsia. Our Russian workers are on average much more educated and more cultured than the vast majority of office “slackers”, particularly because they constantly deal with real production, material objects, and do not soar in illusions and idealistic abstractions.

Now that we have sorted out who is a worker and who is not, it becomes obvious that there is no reason to say that there are more “representatives of the intelligentsia and other categories of working people” than workers. Exactly the opposite – the working class and the adjacent working strata with their families constitute in our country, as well as in the other capitalist countries of the world, the vast majority of the population. Modern capitalism clearly demonstrates to us that the law of proletarianization of the population, discovered by Karl Marx, does work, just as the other laws of capitalism do.

As for the answer to the question of our reader, who can participate in our movement, join it, the answer is simple: all those who have firmly adopted the ideological outlook of the working class, regardless of their formal class position. This standpoint was exactly what the Bolsheviks were guided by  when creating a political party of the working class. And we do not see the need to change it. This means that, in principle, a representative of the bourgeois class can share the ideology of the working class, but then, if his convictions are really sincere, he can no longer remain a capitalist and exploit the workers.

Therefore, representatives of the intelligentsia and other sections of our society may well enter the “Work Way” movement if they share the class line of the proletariat, stand firmly on it and have rejected their former bourgeois or petty-bourgeois ideas and views.

One of the tasks of our movement is to help such comrades — conscious and active workers and all who share their class worldview — to find their like-minded group.