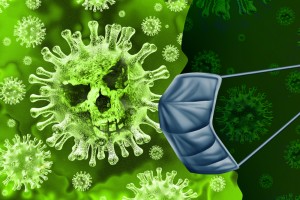 The “lethality” of coronavirus COVID-19 is being trumpeted by every media today. The purpose of this whole inflating hysteria surrounding the virus is obvious: to sow fear among the workers — i.e. implement ideological terror (Latin terror — “fear, dread”). In order to do this, small bits of information, minimum objective facts and maximum subjective interpretations are reported.

All those are “classical” methods of manipulation, which have been already tried out by Goebbels’ Propaganda Ministry in Fascist Germany — giving information in fragments, in small unrelated pieces, so that a person wouldn’t be able to build up a complete picture and form  the cause—and—effect relationship in their brain; the truth must be dissolved and drowned in a sea of lies and insignificant details; in the broadcasts, the emphasis is made not on the facts, but on emotions, because, as it is known, the stronger a person’s emotional reaction is, the harder it is for them to use critical perception.

Let’s try to summarize the data regarding mortality of coronavirus in Russia. As of March 31, 2020, there were 2 337 cases of the infection registered in Russia, 124 people recovered and 17 died.

Two thousand three hundred thirty three cases among 140 million citizens of the Russian Federation is less than two people per 100 000. At the same time, “according to the data provided by the Smorodintsev Research Institute of Influenza: the average number of influenza illnesses and acute viral respiratory infections (AVRI) in Russia is 848 cases per 100 000 inhabitants”. Meaning there was no reason to declare an epidemic of coronavirus in Russia! However, as we know, it was declared; in violation of all the rules and principles of epidemiology; by backing it up with lethality (being dangereous for humans).

Well, let’s deal with the lethality, we have the statistics on it as well: 17 out of 2337 infected have died. That means the lethality rate of coronavirus is currently 0.72% in Russia, according to the official data.

Note that the lethality rate of ordinary flu and SARS is 2-3%. According to the World Health Organization (WHO), 290 000 to 650 000 people around the world die from influenza annually and 3-5 million people get severe flu-related complications. Complications most often occur in the respiratory system (the most common illness is pneumonia), also the organs of the cardiovascular system, hematopoiesis, nervous and genitourinary systems can be defected. However, no one gets hysterical about that in the media, nor imposes house arrests on millions of people around the world.

Let’s try to figure out who hasn’t survived the COVID-19 infection. The deaths of people listed below have been officially linked to the COVID-19 (the numeration below is sequential and corresponds with the exact time that the death of the citizen was announced in the media).

1. 1st and 2nd on March 25, 2020, two elderly patients, aged 73 and 88, died in Moscow with a positive coronavirus test result. The patients had “various pathologies and pneumonia”. The details of the diagnoses are not revealed.

Before that, two women died in Russia, their names were also innitially included in the list of victims: it was stated that they were COVID-19 positive. However, the forensic medical experts found out another cause of death of one of the women — a detached clot. The second woman had the final stage of cancer and she died from cancer.

3. On March 27, 2020, a woman aged 70 died in Moscow. She had been suffering from diabetes mellitus, terminal renal failure and other diseases for 20 years.

4. On the 27th March 2020 a 56-year-old woman died in Moscow. The operational headquarters noted that the woman had one lung lacking after suffering from cancer.

5. On the 28th March 2020 a 57-year-old man, who returned from a trip abroad, died in Orenburg. The regional chief of medicine reported that this man had “related (chronic) diseases” and that he had been put on artificial lung ventilation.

6. On the 28th March 2020 in St. Petersburg the Governor, Alexander Beglov, reported that a man died at the Botkin Hospital (age unknown). “The cause of death will be determined after autopsy,” stated the governor.

We were not able to find any detailed information about other deaths. We would appreciate it if our readers could help us complete this list.

What conclusions ought to be made from the above?

The first conclusion. Obviously, coronavirus lethality has been trememndeously overexaggerated. In comparison with the ordinary flu and SARS, as we noted above, lethality rate of the flu is 3-4 times higher than the lethality of the “horrific” COVID-19.

The second conclusion. People had died not from the virus itself, but from severe chronic pathologies. Coronavirus just served as a trigger. And that’s not surprising, because this virus is basically just a regular SARS. No more, no less.

So why did the capitalist governments in Russia and the world need such “decisive” measures to prevent and localize the virus? After all, it is obvious that the measures are extremely disproportional to the real threat. The inflation of the hysteria around the “killer virus” is artificial, and it is beneficial only to the largest monopolies, which want to survive yet another capitalist crisis in this way (de facto they want to postpone the collapse of the entire rotten capitalist production system).

The largest capital has switched to open terror, both ideological and physical terror (the enforced isolation of millions of people in their houses all over the world proves this). And this conversion was lightning fast. We got pressed up against the wall in a matter of seconds.

Now is the time for millions of workers to say their word. The choice is simple: either to become sacrificial lambs or to be free people and hold our heads up high!