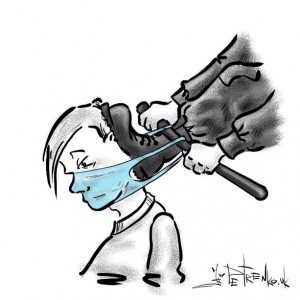 Contrary to the persistent “unwillingness” of COVID-19 disease to spread to a scale at least comparable to what is considered an epidemic in terms of evidence-based medicine, the authorities have taken another ridiculous step: a number of regions have introduced the so-called “mandatory mask wearing”. In this regard, the question of legitimacy of this “quarantine measure” immediately arises.

Many Russian citizens, fortunately, understand the absurdity of the current “quarantine measures”, including this one, and quite rightly consider this “measure” to be yet another act of public humiliation and robbery of all and everyone, which the authorities have been imposing on the population.

A reader’s letter came recently to the editorial office of Work Way:

“Posters like this one are being put up near house buildings (see photo). The thing is, there is no logic in this. If masks really helped, their wearing would have been introduced much earlier! Each removed mask is a spit in the face of the fascists, and each mask deliberately not worn is a punch to the gut for them”.

From the Editorial Board of Work Way. These posters are legally negligible. They do not serve as a guide for any public actions.

Quarantine measures are not a joke, and frivolities must be excluded if there is indeed any danger of biological or chemical contamination.

Personal protective equipment for each type of infection should be strictly this or strictly that, and no other. There are many kinds of masks: from a Spiderman mask to a gas mask, including medical masks – there are several kinds. Which of them should be worn (since the doctor said that their wearing is “necessary”!), should be clarified with the reference to the appropriate hygienic standard (see Federal Law of Russia 52-FZ). The same applies to gloves: there are many types of gloves from constructor’s gloves to ladies’ kidskin gloves, there are also various kinds of protective gloves: electrovolt insulating gloves, etc. The recommendation to wear gloves must have a reference to the corresponding hygienic standard. Naturally, if there is a scientific basis for the use of protective equipment, they must be distributed by the authorities free of charge to each citizen of the Russian Federation (in the area of infection) in the amount necessary for the entire duration of the quarantine measures. Otherwise, this prescription is a profanation and an introduction of property censorship in the realization of the most important human right – the right to life.

In order to legitimately insist on compliance with his or her prescription, the Chief Medical Officer must describe the nature of the threat with reference to a scientifically proven excess of the epidemic threshold of morbidity and with reference to an existing standard that regulates the undertaken sanitary measures, in this case, the MANDATORY wearing of a mask (which definitely can’t be just any mask!) and recommended wearing of gloves (which, again, definitely can’t be just any gloves!). Meaning that in such regulations, the chief physician should not be guided by his or her speculative considerations, but by existing sanitary and epidemiological standards.

These standards must be explained to the population not just from the TV screen by an academician, an official, or even the president, but they must be available in all their entirety, including references to the original scientific papers, for review and critical reflection by ANY citizen of the Russian Federation, on the official website of the outbreak prevention headquarters at any time of day and night, must be at the disposal of EVERY OFFICIAL dealing directly with the population. This includes every police officer and every responsible person in every public place: store, transport, workplace, etc.

Any communication with the public must begin with this or that official, responsible for monitoring compliance with quarantine measures, showing these scientifically proven standards. And it must end with them handing out the necessary personal protective equipment FREE OF CHARGE.

Wearing personal protective equipment mustn’t be just blind compliance – everyone must know the seriousness of the threat, its scale, the necessity of collective struggle against it, the efficiency of the prescribed actions. The last condition is especially important: the effectiveness must be scientifically grounded, and when we say this, we mean that not only the purely physiological, but also social aspects of the use of certain measures must be considered. For more details, see the article “On “legality” of quarantine and “mathematical models” of epidemic development. Part 2”.

The population must know where this or that measure came from and on which occasion in the collective experience of humanity in the fight against diseases it proved its effectiveness. After all, any restrictive measure also has negative aspects that can outweigh the direct threat. For example, you can castrate the entire global population to stop the spread of venereal infections, but then humanity will die out. You can lock everyone up at home, but then humanity will degenerate and lose its immune system, which means that it will become extinct again from a multitude of illnesses that will not hesitate to attack it. You can put on masks on everyone (mind you, only if they are free for ALL!), but it is a terribly antisocial measure, leading to the degradation of all human connections, panic, shamefulness, phobias, etc., weakening of the immune system – the society will begin to collapse, and the population will start dying out.

However, we explained all of the above in order for our readers to understand what to demand from the authorities in case they insist on wearing masks or observing their quarantine measures. Mankind DOES NOT know of any instances when the current “quarantine measures” were effective, particularly wearing masks on a daily basis. There is no such sanitary norm. It is false-scientific. This means that the chief physician has no right to “prescribe” it: he does not have the authority. Nor does the president. Nor the parliament. This is just a private wish of some unknown persons (or, rather, well-known ones – the oligarchs) that doesn’t have ANYTHING to do with fighting the coronavirus.

All of the above should be kept in mind, if you, dear readers of Work Way, should get forced to strictly follow this instruction. It is called ARBITRARINESS or otherwise – state TERROR against the people.

Chief physician (official, deputy, oligarch, general, policeman, etc., in other words, anyone who plans to control the implementation of this order) can torture himself as much as he wants, he can sleep with his wife wearing plague gowns, walk down the street wearing full body protection suit, undergo complete disinfection every half an hour, daily conduct a full course of disinfection of his home, process every piece of fruit with boiling water before it is put into the mouth, wipe his hands with alcohol every time before touching the face, not communicate with anyone face to face, completely switching to virtual means of communication, and limit their income (and expenses) to 12000 rubles per month, which he will be promised to receive by the president every month. Let him dedicate his life to the preventive struggle against coronavirus by refusing to treat all other diseases. Perhaps after all this he shall not get the notorious SARS-cov-2 specifically. But we’ll see how long until he goes insane.

To sum up: an official who prescribes or monitors the implementation of a certain “quarantine measure” (or a set of such measures) that does not rely on the Law 52-FZ, i.e. the Sanitary Code of the Russian Federation, is not exercising their CONSTITUTIONAL DUTIES. Their actions, beyond the scope of their official powers, have no legal grounds, and if the person is hiding behind their official position, then it is an abuse of power, an assertion of themselves above the law, and therefore, is ILLEGAL. Subordination to the orders of a given person is not obligatory for anybody. The support of these orders by persons without any authority in the form of exerting pressure on citizens who do not comply with these orders means ASSISTING THE ARBITRARINESS, ASSISTING THE UZURPATION OF POWER.

Look at this picture. 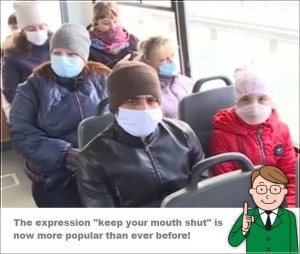 The first thing that comes to mind is a slightly reinterpreted question from a children’s fairy tale about Dr. Aibolit (Dr. “Ow-It-Hurts”) by Korney Chukovsky:

“What is wrong? What is this thing?

Have our people all gone ill?”

It isn’t scarlet fever or cholera

It isn’t diphtheria or appendicitis,

It isn’t malaria or bronchitis

It’s the virus of fear!”

Indeed, the virus of fear is the only thing that guides people wearing ridiculous masks like macaques. After all, no one is forcing them with a gun! Though even the threat of violence or a fine does not always excuse this or that action.

I wonder how quickly the people on the bus would have taken off their hateful muzzles if they had learned that the punitive measures taken by the authorities for non-compliance with any of the “quarantine measures to suppress COVID-19” are entirely illegal? That this is deliberate and targeted terror against them, i.e. fascism?

That’s just what it is. Because these “quarantine measures”, as we found out above:

All existing types of FASCIST TERROR have been used against the population, not prepared for this turn of events:

The first two of these types of terror can be easily resisted by all and everyone. The virus of fear can be cured!

By gaining knowledge and understanding of what is happening and organizing collective resistance to terror.

Everyone must join the struggle and become an active fighter of the United anti-fascist people’s front. 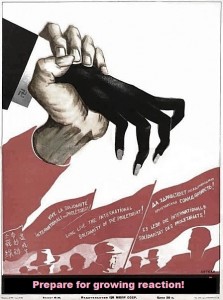